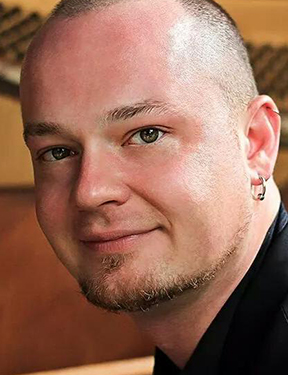 Jimmy makes his Kokandy Productions debut! He is also the third Artistic Director of the Chicago Gay Men’s Chorus, as well as music director for VOX3, choir master/organist at St. Helena’s Episcopal Church in Burr Ridge, IL. He primarily works as a coach, accompanist, and music director for the Theater Conservatory of Chicago College of Performing Arts at Roosevelt University, where he has also served as Adjunct Professor of Music Theory/History and German Diction. James received his MM in Piano Performance and Music Theory from Roosevelt University and his BM from Duquesne University. As a Music Director, James has worked on See What I Wanna See in the 2013 Steppenwolf Garage, Jerry Springer: The Opera, bare (Jeff Nominated: Music Direction), Passing Strange (Jeff Nominated: Music Direction), Dessa Rose (Jeff Nominated: Music Direction), AIDA, Trouble in Tahiti, The Rainbow Connection, The Mikado, The Impresario, Barber of Seville, The Old Maid and the Thief, Two Gentlemen of Verona, Sondheim in the Park, The Wandering Scholar, The Bear, Reagan’s Children, Something Schwartz, The Way We War, Copacabana, Cupid and Psyche, Promises, Promises, Screwed Up People, Flaherty and Ahrens On and Off, The Tony Goes To, The Tony Goes II, and Once, Twice, Three Times a Tony, among many others. Classically, James has performed at the Auditorium Theater, Chicago Cultural Center, Rockefeller Chapel, Chicago’s Gospel Fest 2012, Ravinia, and Harold Washington Theater, among many others. He has collaborated and performed with the Juliani Ensemble, the Grande Prairie Choral Arts Singers, Anaphora, Lyric Opera Kids, and ChiArts. He has also appeared as a featured pianist at the Green Mill, Mary’s Attic, the Tavern, Gentry on Halsted, Spin Nightclub, Davenport’s, the 410 Club, the Spot, and the Casino.

Click here to return to the The Wiz page.