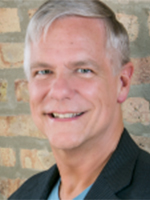 John has directed Kokandy’s The Last Five Years, Sweet Smell of Success (Jeff Award nomination Best Musical), The Full Monty (Jeff Award nomination Best Musical), and most recently, Tomorrow Morning. For six years, John was responsible for the artistic and fiscal direction of the Theater Company of Purdue University and has directed regionally in Ohio and Indiana, including directing the grand opening production of the Theatre at the Center in Munster. John is the recipient of several Northern Indiana Excellence in Theater Foundation awards (NIETF), including Best Direction of a Musical for Pump Boys and Dinettes (Purdue Theater Company) and Best Direction of a Musical for Floyd Collins (Towle Theater), as well as a Lifetime Achievement Award in Regional Theater. In the “real world,” John is the Chief Operating Officer of a not-for-profit, faith-based senior living ministry.