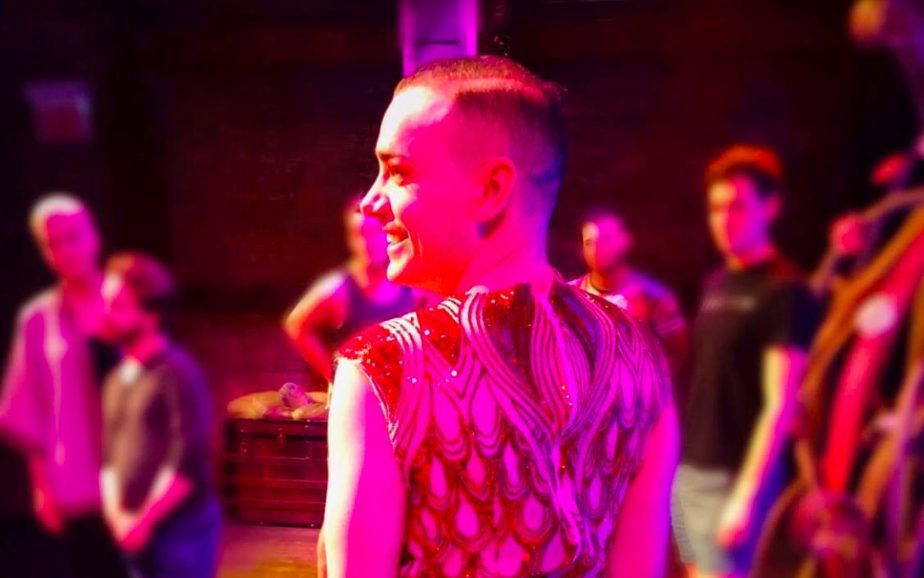 Parker Guidry (they/them) is currently starring in Kokandy Productions’ smash-hit musical Head Over Heels, now playing through September 8th at Theater Wit. Parker is earning rave reviews in the role of mystical oracle Pythio, a character originated on Broadway by Rupaul’s Drag Race star Peppermint. We gabbed with Parker about the show, the shoes, and all that goes into being a Vision of Nowness…

Parker, tell us a little bit about you!
I’m originally from Lafayette, LA – a Cajun, through and through. I moved to Chicago in 2010 to go to Roosevelt, where I studied musical theatre. I’ve had the joy of working on many shows here in the city since then, though this one has been my absolute favorite (shhh, don’t tell anyone)!

Tell us more about Pythio and the world of Head Over Heels!
Head Over Heels starts in Arcadia, where King Basilius rules with a firm grip on tradition. No one else, however, seems to be on quite the same page. Enter Pythio (most fabulously), the new Oracle of Delphi, who delivers four prophecies and warns the king that if all four are fulfilled, his kingdom will fall. So naturally, the king orders all of Arcadia to join him on a journey to prevent Pythio’s divinations from coming true. The rest, well – you know how it goes when kings try to avoid prophecies. We’ve all seen Macbeth, yes? Except unlike Macbeth, we have Go-Go’s music and celebrate genders and love of all kinds!As for my character Pythio – they are an absolutely delicious role to play. Pythio is the first explicitly non-binary role in a musical that has been on Broadway. So while it is an absolute thrill to play a role that makes me feel so seen and genuinely represented, it is also an honor to play what feels like such a monumental character for the trans and non-binary community.

Rumor has it that you’re DIVINE in the role of Pythio. Could speak a bit to  your connection to the role and the show?
Well, those rumors are very kind! I think my success in playing this role is rooted in my joy to play a character that I so deeply connect with. At the top of the show, Pythio has the strongest sense of self – and they are the only character to use magic. I like to think that these qualities are linked. Because for me as a person, it was in discovering and exploring my own gender identity that I found my own “magic” and power in being my authentic self. It was a journey for me, and we learn it was a journey for Pythio, too. So the way I interpret Pythio, the powers and the magic come from this greater understanding of gender, individuality, and purpose – and all I’m trying to do is guide the people of Arcadia to that greater understanding, as well. But like – I’m gonna have a little fun with them, first.

Do you have a favorite song/part in the show? If so, do tell why!
My favorite scene to do in the show is my scene with Jeremiah, where Pythio introduces Musidorus to the Amazon disguise. Musidorus sees himself in the wig and dress for the first time, and something is unlocked from within him. And that’s where I think the meaning of Pythio’s “Vision of Nowness” is fully explained – Musidorus disguised as Cleophila is a vision of what the world can be when we let go of the boundaries that society has created through gender roles. And what Pythio knows is that ‘Cleophila’ is less of a disguise, and more of a guiding light on Musidorus’ path to self discovery. It reminds me of a moment I very distinctly remember in my own gender-journey. I was in a costume fitting for Priscilla: Queen of the Desert, and they put me in this gorgeous mermaid gown. And the moment I first saw myself in the mirror, I felt like something inside me clicked into place – and I was forever changed. So it’s very cool to play my scene with Jeremiah as if Pythio is giving Musidorus that moment to click into place.

What makes Head Over Heels special?
I think what makes it so special is that it’s so accessible! It’s sort of disguised as another silly, feel-good jukebox musical (and it *is* all of those things), and that’s how it lures audiences into joining these characters on a journey to discover some very deep truths about themselves and the world around us. The fluidity of gender identity and sexual orientation can be a dense and sometimes daunting topic – so we set it to 80’s girl group bops and say “Hey, come join the party!”

Anything else we should know?
I am having the absolute time of my life in this show. Queer and trans characters are always given tragic story lines in plays, so it’s such a blast to turn the tables and be the fabulous, all-knowing, all-powerful figure that truly most trans people see when they look at each other. Also, don’t tell Uriel, but I’m making a run for it with all of my costumes as soon as we close, because I don’t want to part with any of them!

Head Over Heels has been extended, and is now playing through September 8th! Don’t miss your chance to see Parker in action, and see the hottest musical in Chicago this summer! Get tickets HERE! 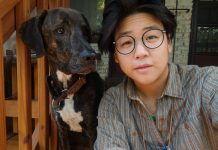